Vasco da Gama was a Portuguese sailor, navigator, and the first European to reach India by sailing around Africa. He grew up the third son of a Portuguese noble and probably received advanced education in mathematics and navigation.

When da Gama was a teenager, Bartolomeu Dias discovered that the Atlantic and Indian Oceans were connected. King Manuel I began to seek out a direct trade route to India and appointed Vasco da Gama’s father, Estĕvão da Gama, to discover one. However, Estĕvão died before he could make the journey, and the task was re-assigned to his son.

Vasco de Gama set sail in 1497 with four vessels and about 170 men. They had little trouble down the west coast of Africa and rounded the Cape of Good Hope, anchoring at Mossel Bay in South Africa for a month before setting out into Muslim-Arab controlled waters in the Indian Ocean. Da Gama and his crew spent six months at sea, enduring illness and starvation. 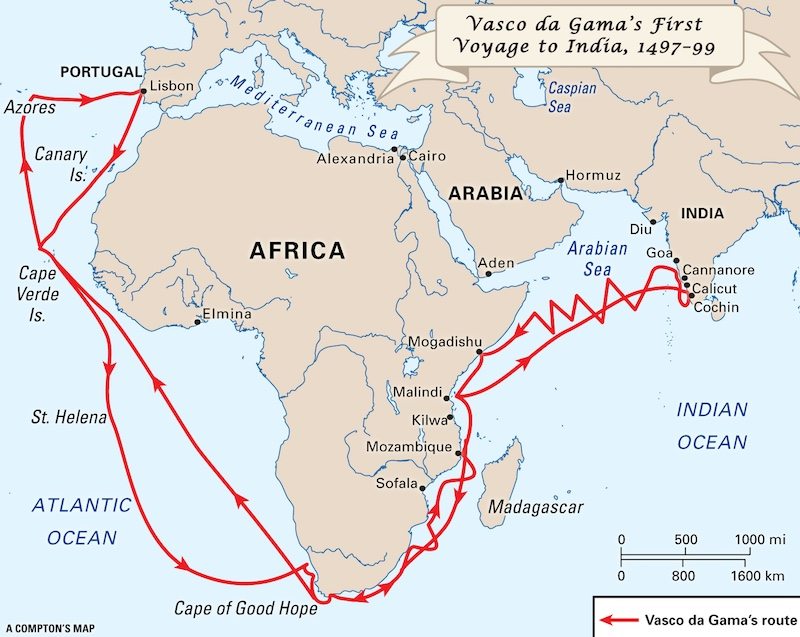 Upon landing, da Gama pretended to be Muslim and began asking suspicious questions about the Arabian Sea and the eastern coast of Africa. When it was discovered that he was Portuguese and not Muslim, he and his crew were chased back out to sea. Muslim traders placed a bounty on de Gama, his crew, and his ship, because they had lied about being Muslim, and they were in Arab territory without permission.

Da Gama and his men landed in Mombasa. The sheik acted friendly, but the Portuguese discovered a plot against them and fled once again. At their next landing, the sheik allied with the Portuguese, giving them pilots to guide them to Calicut.

In Calicut, de Gama presented the ruler with gifts, but the ruler was insulted by them, feeling that they were lowly and unsuitable. So they fled the region, losing more of their crew and scuttling a ship in their struggles to make it home. Overall, it was a dangerous, deadly voyage. Da Gama’s extensive route took him 24,000 miles over two years, and he lost two ships and nearly 120 men.

Upon return to Portugal, da Gama was considered a hero and was awarded titles and estates. The king dispatched him on a second voyage for the eastern coast of Africa in an effort to remove Muslim control on trade in the Indian Ocean and bring Christianity to the region.

Da Gama’s second expedition sailed a well-armed fleet of 20 ships, engaging in brutal battles along the eastern coast of Africa and earning a reputation for tyranny. They failed to secure Portuguese control of the trade routes, but they did reach Calicut. When they arrived, they demanded that Muslims be banned from the city, but the rajah was not accommodating. They were chased back to the African coast. Vasco da Gama before Zamorin of Calicut by Veloso Salgado, 1898

Upon returning to Portugal, King Manuel took da Gama on as an advisor on Indian trade, customs, and negotiations. Da Gama lived for 20 years on his estate with his family, which included six sons and a daughter. When Manuel died, his son John III ascended the throne. He again dispatched da Gama to India to spread Christianity and gain a new perspective on the people. Da Gama was overtaken by illness in Calicut and died on Christmas Eve in 1524.

“The Last Crusade: The Epic Voyages of Vasco da Gama” by Nigel Cliff