“It was ordained that I should not go by land to the eastward, by which way it was the custom to go, but by way of the west, by which down to this day we do not know certainly that anyone has passed. . . .”

Christopher Columbus was an experienced merchant sailor and navigator from Genoa who led the first European trans-Atlantic sea voyage in 1492. He has historically been credited with “discovering” America, although today’s historians argue a new understanding of the global impact of Columbus’ voyage.

Not much is known about Christopher Columbus’ life growing up, but by 1477, he and his brother had established themselves as merchant sailors based out of Lisbon, Portugal. Columbus sailed to Ireland, Iceland, West Africa, and around Europe. Marco Polo’s accounts of the riches of China and India inspired Columbus to seek a direct westward-bound route. Contrary to modern belief, the educated noble class of Columbus’ day did not think that the Earth was flat. Columbus’ journey was instead motivated by a drive to find a direct route to India without sailing around Africa. 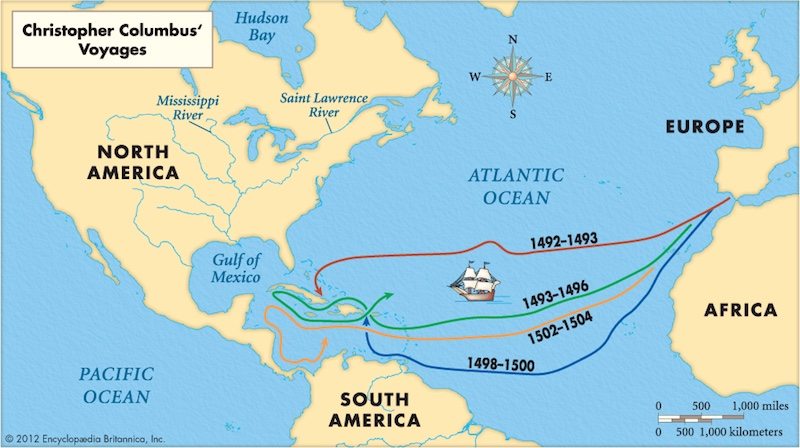 The routes of the four Voyages of Christopher Columbus

In 1484, Columbus began to solicit funding for a westbound voyage from King John II of Portugal, who declined to finance the expedition. Columbus traveled to Spain for an audience with King Ferdinand and Queen Isabella in 1486 but was rejected at least twice before they agreed to sponsor his journey in 1492.

Sailing from the coast of Portugal, Columbus and his crew were the first Europeans to encounter islands in the Caribbean Sea. When he arrived in the Caribbean, he mistakenly believed he was in the western part of India, therefore calling the region the “West Indies” and coining the misnomer of “Indians” for the indigenous people. Columbus Before the Queen by Emanuel Leutze, 1843

The indigenous people in the Caribbean included the Eastern, Western, and Classic Tainos; the Island-Caribs; and the Guanahatabeyes. The Tainos had no concept of slavery, and they placed a high value in battle on disarming an enemy and sparing his life. It was because they did not kill their enemies that Columbus found them “weak” and “easy to rule.” He had been seeking the gold and rich spices of India and found none of them in the Caribbean, so he loaded his ships with human cargo and returned to Spain with reports of the manual labor that could be found in the “New World.” 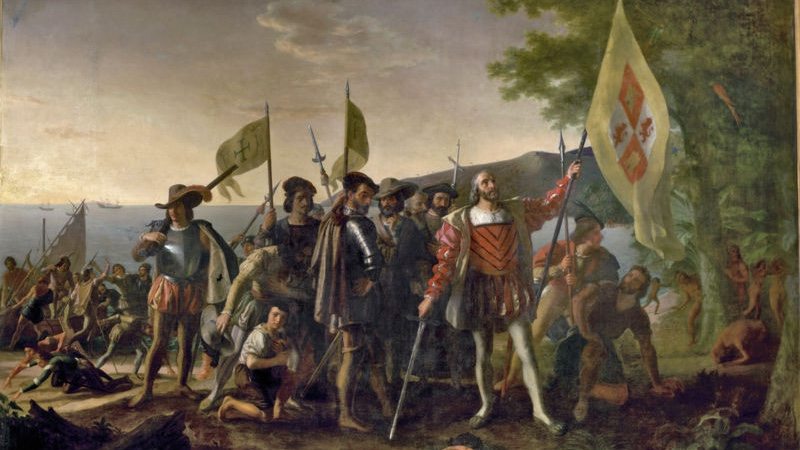 Christopher Columbus and his crew landed in the Bahamas in October, 1492

Columbus ultimately sailed four voyages across the Atlantic, visiting modern-day Jamaica, Venezuela, Panamá, Cuba, Puerto Rico, Haiti, the Bahamas, and the Dominican Republic. Columbus established settlements that grew into colonies, where he acted as governor. He used brutal conversion methods and oppressive tactics to stamp out rebellions from indigenous inhabitants before being relieved of his governorship.

Columbus returned to Spain to demand additional compensation but succumbed to a number of illnesses that plagued him in the final decade of his life. Christopher Columbus died in Spain in 1506 and was initially buried in Seville. His remains were later moved to the Dominican Republic, then to Cuba, before being returned to Spain. The ashes interred in Seville have been confirmed as Columbus’, but there remains some dispute over whether the remains in the Dominican Republic are also from Columbus.

“The Four Voyages: Being His Own Log-Book, Letters and Dispatches with Connecting Narratives..” by Christopher Columbus