Episode #10 of the course “Brief history of architecture”

Contemporary architecture technically includes all the buildings of today, but a historical style has emerged in the second half of the 20th century that is distinguishing itself from the modern architectural style of the early 20th century. The global economy and international cooperation that exploded after World War II has greatly affected artistic influences around the world, and contemporary architecture is marked by this both this transcontinentalism and a sense of placelessness, as well as an attempt to make structures integral to their surrounding environments. 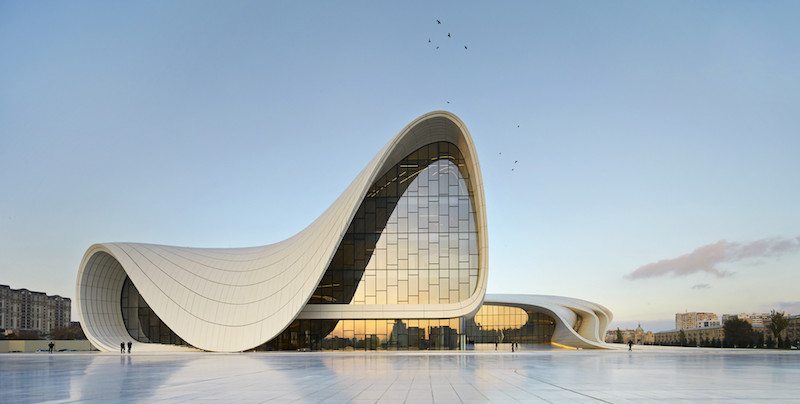 In an extension of the modernists’ attempts to combine the outdoors and indoors, contemporary designers have taken the concept to new extremes, including an emphasis on using natural lighting and materials. Rooftop and balcony gardens are now commonly added to city-trapped skyscrapers, and contemporary city residential buildings are often centralized around courtyards full of live vegetation. The Parkroyal in Singapore, designed by a team of architects, engineers, and consultants who were largely local, includes thousands of plants throughout its incredibly lit and sleekly modern design. The Parkroyal, Singapore (design by WOHA)

With the dawn of the computer and the new technological advantages it provides to all aspects of human life, architects have taken advantage of computer-aided drafting programs to experiment with line, shape, and form like never before. Contemporary architecture is largely marked by use of curvilinear, asymmetrical designs that would require complex mathematical calculations without the use of computers. Repeating precise geometric patterns often found in nature, such as the double-helix spiral and the sine wave, are combined with unexpected architectural achievements, such as inverting a building so it is “standing on its head.” An element of postmodern architecture some call “deconstructionist,” these are intended to shock onlookers and have grown out of 20th-century scientific discoveries and the use of the computer as a design tool. Toward the end of the 20th century, people began to be concerned with the sustainability and environmental impact of their living. One of the most recent distinguishing features of contemporary building design is the use of repurposed materials, design elements that reduce energy use and waste, and sourcing from local businesses to reduce energy consumption during the building’s construction.

“The Story of Buildings: From the Pyramids to the Sydney Opera House and Beyond” by Patrick Dillon