The First Civilizations: Egypt and Mesopotamia

Ancient Egyptian civilization emerged in the fertile Nile Valley, bounded on either side by harsh deserts. In Mesopotamia (now southern Iraq, the land between the Euphrates and Tigris rivers), the first cities appeared on irrigated lands. Both resulted from the consolidation of political and economic power.

Before 3100 BC, the Nile Valley held a series of competitive kingdoms. After centuries of unsettled conditions, Egypt became a unified river valley state under a leader named Narmer.

Sumerian civilization in Mesopotamia was a patchwork of small city states, each with their own aggressive ruler and patron gods or goddesses. All depended on irrigation agriculture and highly centralized government.

In the case of Egypt, the pharaoh was supreme ruler, thought to be a living god. In Mesopotamia, city rulers known as lugals were considered to have divine powers. They were also skilled warriors.

Ancient Egyptian civilization endured for 3,000 years, but with ups and downs.

After a few centuries of adjustment, “Old Kingdom” pharaohs, who were considered gods with power over the life-giving Nile flood, ruled over a powerful, centralized kingdom.

They, and later kings, ruled using a philosophy of ma’at, which means “balance.” The pharaohs boasted that they presided over an orderly kingdom where there was serene order in the cosmos. Once they died, they joined the sun god, Re, on his daily journey through the heavens.

Old Kingdom pharaohs were buried under increasingly elaborate pyramids, symbolic sun rays that linked heaven and earth. The Giza pyramids near Cairo commemorated Pharaoh Khufu and other kings. The Old Kingdom disintegrated after a series of catastrophic droughts around 2180 BC. For three centuries, competing provincial officials competed for power. After 2040 BC, their conquests led to a newly unified state. The center of power moved upstream to Waset (modern-day Luxor) in Upper Egypt, home of the worship of the sun god, Amun-Re. “Middle Kingdom” pharaohs were energetic conquerors, improved their bureaucracy, and traded widely with other Mediterranean states.

But in 1640 BC, another period of political instability occurred, which ended when Upper Egyptian “New Kingdom” pharaohs conquered the south and turned the country into a more militaristic state. Egypt became a player in eastern Mediterranean politics during the reigns of Seti I (c. 1290 BC) and Ramesses II (c. 1250 BC), among others. Pharaohs were buried in rock-cut tombs in the Valley of the Kings, world-famous for the discovery of Pharaoh Tutankhamun’s tomb in 1922.

Map of Ancient Egypt, showing major cities and sites of the Dynastic period (c. 3150 BC to 30 BC).

Egypt came under increasing Greek influence after 1070 BC as the state weakened, being conquered by the Romans, and was made a province of their empire in 30 BC.

Thriving cities, among them Uruk, developed in Mesopotamia before 3100 BC. Sumerian civilization developed as a series of city-states after 3000 BC.

The Sumerians were expert long-distance traders, which made written records essential, recorded in a wedge-like script known as cuneiform on clay tablets. 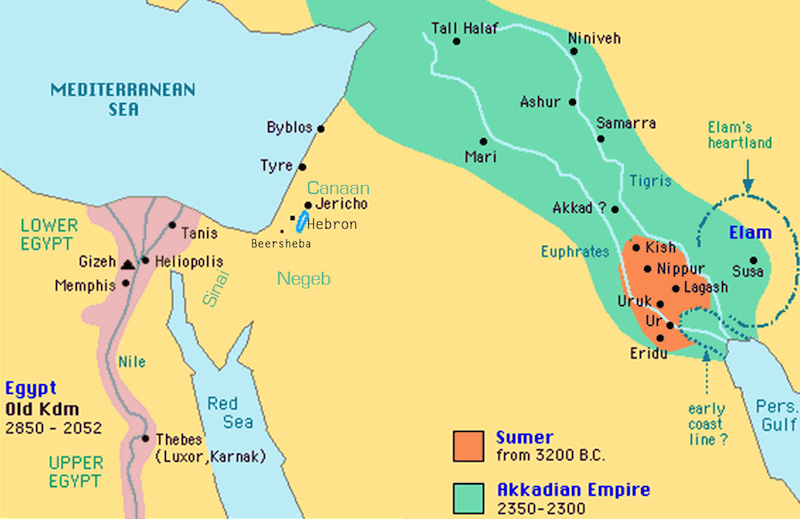 Map of Sumer and Ancient Egypt.

Metal tools and weapons, an alloy of copper and tin, appeared, as did the plow, a revolutionary way of cultivating fields. Sophisticated business and political alliances linked competing city-states, rising and coming apart in an ever-changing political jigsaw. These diplomatic moves pitted ruler against ruler, often in disputes over water rights.

By 2800 BC, several larger city-states were in existence, as competition for trade and resources intensified. The rulers of some cities, notably Ur, had broader ambitions that extended to the eastern Mediterranean coast and its lucrative trade.

Constant economic and political rivalries developed, culminating in the empire of King Ur-Nammu of Ur, who controlled Sumer and upstream Akkad in 2112 BC. He created an empire that extended far to the north. This efficient and well-governed empire gave way to the Semitic rulers of Babylon in 1990 BC. Their leading ruler, Hammurabi, created the first written law code in about 1792 BC. After 1000 BC, the Assyrians of Old Testament fame, in what is now northern Iraq, competed with the Egyptians and others for control of the eastern Mediterranean world. The Babylonians overthrew the Assyrian state in 612 BC. Seventy-three years later, Cyrus of Persia conquered them, and Mesopotamia joined the much larger Persian empire.

Tomorrow, we’ll move to the east and talk about early Chinese civilization.

The Rise and Fall of Ancient Egypt by Toby Wilkinson