On Day #1, you learned that you have a secret superpower. And part of this superpower is the ability to decode faces. The face is the window into the soul—if you know how to read it.

Knowing how to read and interpret microexpressions is an essential part of understanding nonverbal behavior and reading people. There are seven universal microexpressions:

And the one I want to discuss with you today is the last one: contempt.

Contempt is a one-sided mouth raise, otherwise known as a smirk. It looks like this:

So what’s so special about contempt?

Contempt is often considered the most powerful of the microexpressions. It means hatred or disdain. As a half-smile of sorts, many believe that it’s like half-happiness, but that is far from the truth. When we see contempt on someone else, it signals to our brain that the other person greatly dislikes what was said or what’s happening around them. It can also be perceived as an “I’m better than you” signal.

The question is: Are you showing contempt in your photos?

The #1 mistake I see in social profile photos is the smirk. So many people make this mistake without realizing the meaning behind it. If contempt is in your profile, you are basically telling the world you don’t want people to connect with you!

The smirk grates on us. Celebrities who frequently employ the smirk rub us wrong. When politicians do it, their ratings plummet. See anyone familiar? • Corners of the lips are drawn back and up

• Mouth may or may not be parted, teeth exposed

• A wrinkle runs from outer nose to outer lip

• Lower lid may show wrinkles or be tense

Many people think that the sign of a real smile is when the teeth are shown, but it’s actually all in the eyes. In an authentic smile, the muscles on the sides of the eyes are activated, resulting in little wrinkles called crow’s feet.

If the eyes aren’t activated, this results in a fake smile or fake happiness. Take a look at the difference below: 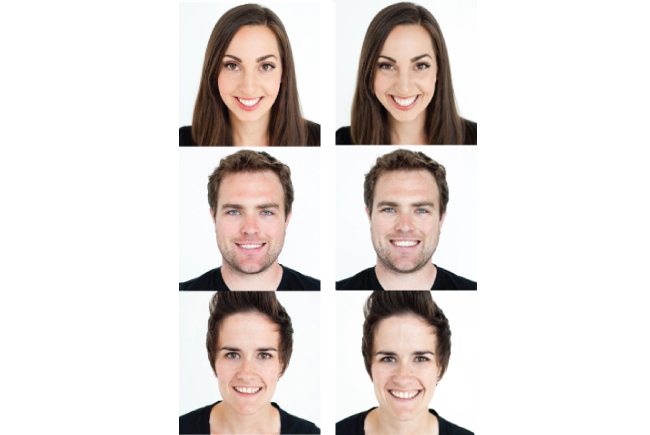 Channel genuine happiness in your photos and in-person by thinking about something that makes you really happy, like your kids or your cat or the new Game of Thrones episode you have waiting for you when you get home. Positive and authentic expressions and emotions create a safe space for meaningful connection.

P.S. Let me take a selfie? Get all my tips on how to take the perfect selfie here.

“You Say More Than You Think: A 7-Day Plan for Using the New Body Language to Get What You Want” by Janine Driver